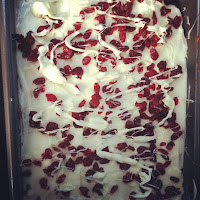 I have been busy baking this Christmas Season here are a few of my favorite eats and a new treat!
Cranberry Bliss Bars 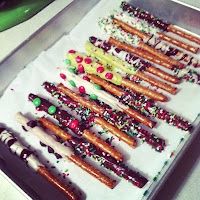 Posted by Unknown at 8:29 PM No comments:

Kyle said I would be surprised. Thursday, November 15th my boyfriend gave me the perfect surprise and finally asked me to marry him! He told me it was on the radar every time we talked about why it was taking so long but in random conversations throughout the past few months he led me to believe he wasn't even looking or thinking about marriage yet.

Normal routine since being in South Dakota with Kyle has been to try and workout right away after work. I absolutely love working out (stress reliever) and hate skipping any workouts. I had a busy Thursday all planned out--hair appointment right after work, wash my car, workout, eat supper (mushroom risotto) and finally head to a friend's house to meet their new puppy. It seemed a bit odd that Kyle was so concerned about my after work schedule of going to the salon and he said he wouldn't be able to wash my car right away because he had some work he needed to finish ASAP. He had just been to a plant in Iowa working with contractors for the afternoon so I wasn't sure what was demanding so much of his time but I went straight to his place to pick him up prior to the gym.

Kyle was in his home office in his gym clothes working on ACAD and I asked if he was ready to go. He said to go grab his shoes in his room and then we could hit the road. I went to his room and his shoes were on the bed and as I got closer there was a ring box with a gorgeous ring right there! I was speechless. Finally, I yelled his name and he was right behind me and grabbed the box with the biggest smile ever. He asked if he should get down on one knee and of course right? Is that even a question? He asked those famous four words "Will you marry me" and because he was so nervous he asked which finger the ring went on! How adorable! I was just so thrilled and overflowing with joy. We ended up dressing up and heading to dinner at RED Steakhouse in Vermillion to celebrate together. Such a lovely dinner and it was so great telling our families and friends via phone and text about the good news. 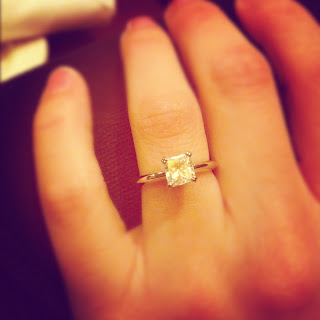 He liked it so he finally put a ring on it!

Maybe you have noticed the current Status fad on Facebook is a daily post on "I'm thankful for..." Everyday in November the poster must state what he or she is thankful for in their life (or at least 30 things they are thankful for). I have lots to be thankful for but have chosen not to participate in this activity. The obvious blessings are a great, supportive and loving family. A fun and caring boyfriend. A chance to be back in South Dakota. A roof over my head, clothes to wear and food to eat. I am a lucky gal!

The reason I am writing this is to mention one thing that I am truly thankful for this season. I woke up this morning at 6am to be early for a webinar at work. I was so tired and could hardly open my eyes; 6am is so early! However, up to October 1st I was waking up at 4am four times a week to be to work at the Target Distribution Center at 5am in order to prepare for daily tasks and planning for start of shift at 6am. I miss my team and my co-leaders but I don't know how I did that for 15 months but I am glad I am not on that schedule anymore. Makes setting that alarm for occasional early starts a little easier knowing the key word is "occasional."

Therefore, I am thankful for a normal work schedule so I can have a normal life. #Blessed.
Posted by Unknown at 11:56 AM No comments:

I was blessed to find an apartment to live in so quickly. It is a remodeled funeral home from the 1950s that was converted into apartments. I signed the lease before I found out about the "funeral home" aspect but I just try to look past that and pretend dead people weren't resting in my basement at one point. It is so gorgeous and has lots of character.

Posted by Unknown at 7:53 PM No comments:

I'm Back in South Dakota

I just moved back to South Dakota. Back to plain and simple life. A lifestyle only a certain breed can handle. I traded the beautiful tree landscapes and abundant lakes in Minnesota for the grassy plains. It was a trade well worth it.

I enjoyed my 15 month stint in Minneapolis, MN.  I worked at the Target Distribution Center as a Group Leader for the Engineering and Facilities department. I loved my team and we got stuff done. I couldn't ask for a better first job right out of college. Even though my job was great and I was doing well there, I eventually became lonely being so far from family and friends. My boyfriend, originally from the Twin Cities area lives and works in the Yankton area as an engineer and after doing long distance (successfully) it just became harder to say goodbye. So, we made the decision together that it was time to live closer together and commit to be together by next May. I was blessed to stumble upon an Engineering position at a manufacturing company, Vishay in Yankton. How could I pass up an opportunity to move back to my home state and within blocks from my boyfriend? So I left my job and am now living blissfully in Yankton, South Dakota.
Posted by Unknown at 8:12 PM No comments: