Our couch is in need of a throw pillow update. My husband "loves" throw pillows. I think it is the price that shocks him the most. Luckily, for him, I am crafty and can sew. I found this fabric I fell in love with at IKEA. I am a little bummed I only got one yard of the material but I hope to go back soon and purchase more for even more crafts but for now, I found solace in using it as a throw fabric.

Here is how you make a quick and easy envelope pillow covering.

Materials needed:
Pre-stuffed throw pillow (you can reuse and refurbish one your already have or purchase one)
Fabric to cover your pillow +some
Thread to match

Steps:
1. Measure your throw--mine was 20"x20"
2. Measure your fabric prior to cutting. I added 6" to the length of the pillow + the 1/2" seam allowance. For width add 1/2" to each side for the seam allowance. Mine ended up being Length: 47" Width: 21"
3. Cut you fabric.
4. Press 1" seams on the short edge of the fabric and sew using your 1/2" guide.
5. Wrap pill with pretty sides together and pin into place. This is where you make your envelope.
6. Remove pillow from case. (Adjust as needed)
7. Sew side seams using 1/2" guide on machine.
8. Flip pretty sides to the outside and push the corners out.
9. Stuff that throw in there and enjoy! 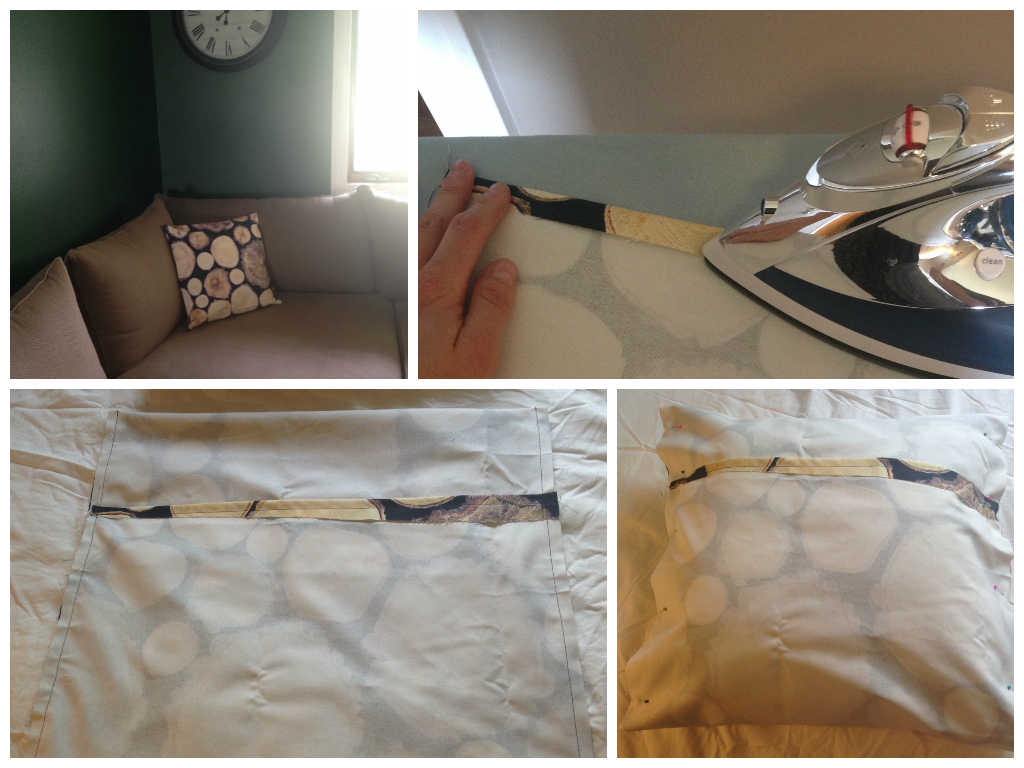 Posted by Unknown at 7:11 PM No comments:

Today I am challenging you to do Squats and Push-ups every day for one month. Sounds easy but it isn't. The challenge is to complete one squat and one push times the date on the calendar. For instance, on the 15th, complete 15 push-ups and 15 squats. You can always do more, but don't do less. If you miss a day, resume the following day or following week completing your challenge for the current day. You don't have to make up for days you miss. It is a consistency thing. I started this challenge the middle of this month. It is tougher then it seems. Find a time that is easy for your to complete these reps. I do my squats while brushing my teeth and my push ups at night before bed. What ever works for you but get those reps in! Challenge accepted? 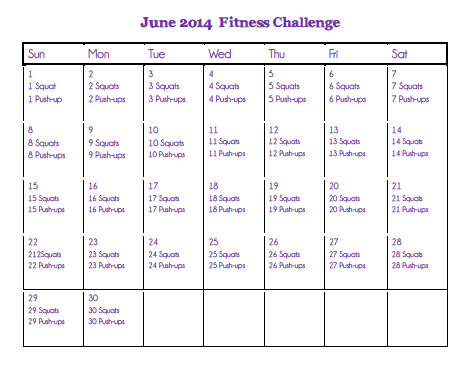 Posted by Unknown at 6:32 PM No comments:

If you don't live under a rock, you have probably heard that Britney Spears is headlining at Planet Hollywood in Las Vegas. What this means is I HAD to GO! I am a huge Britney fan and I couldn't imagine not attending her "Best Hits" concert. I don't even care if she lip syncs. It is the dance beats and sass that I love most.

My future sister-in-law, Samantha, also loves Britney (but honestly, who doesn't?) so we planned a weekend trip. We drug our men to Vegas so that we could dance and the guys could try their luck on the tables in the casinos. Tickets to Las Vegas are very reasonable flying through Allegient Air out of Sioux Falls, SD. We flew in on Friday night and left Sunday afternoon, so let me tell you it was quick and fast. We stayed at Planet Hollywood right on the Vegas strip so that just in case Britney wanted to hang out after her show we wouldn't have any excuse not to!

Once we landed in Vegas, there was no time to waste. Samantha and I danced the night away is several clubs until 4am Vegas time which is 6am Central. So that was very impressive for an engineer and teacher who usually go to bed at respectable times. But it is Vegas! Totally worth the dark circles to experience the club atmosphere.

After we rested well into the afternoon, we got ourselves some caffeine and walked up and down the strip doing the "tourist-y" thing. Saw the fountains at the Bellagio and the show at Ceasar's Palace. Took pictures under the Eiffel Tower replica and spent several hours in the Fashion Show Mall.

On Saturday night, we primped for the Britney concert. We got dressed up really cute and mentally prepared for the best concert of all time. The anticipation and energy at the venue was beyond exciting. Everyone there was a complete fan of the "Queen of Pop". The whole theater was a shrine to the iconic Britney. Outfits from all time favorite music videos were displayed throughout and hits blasted on the sound system.

After the anticipation felt like it could no longer be handled, Britney greeted us with her most recent "Work B*tch" which is a fan favorite. The set included over 20 all time greats from the past to present. I basically knew every word and shouted along when I wasn't in awe. I am pretty sure during all of the dance hits, Britney didn't sing live but she did perform a few ballads like "Perfume" while sets were changing up. Let me tell you, she's got it still! Oh and Lady Gaga also attended the "Piece of Me" show the same night. That was exciting!

I was sad when the encore finished but Samantha and I had so much fun. We bought enough swag to remember the concert by and it was a great bonding experience. 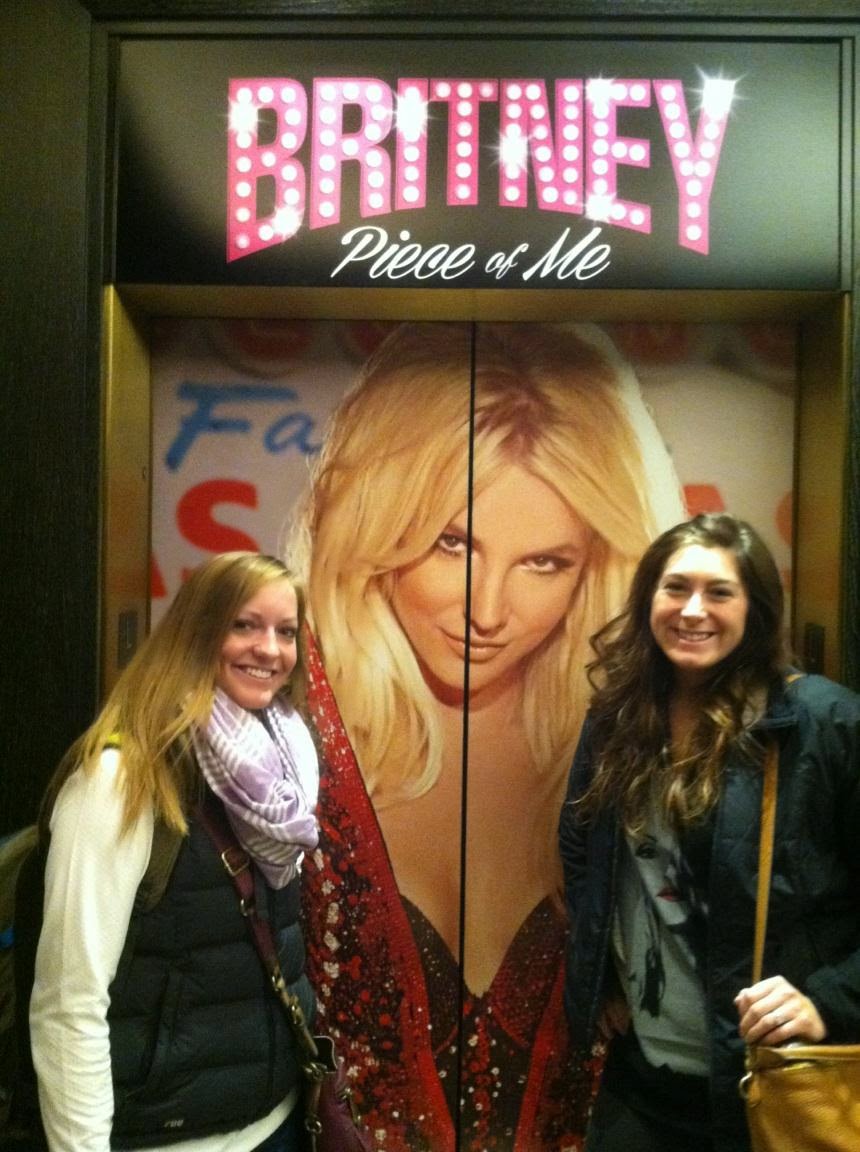 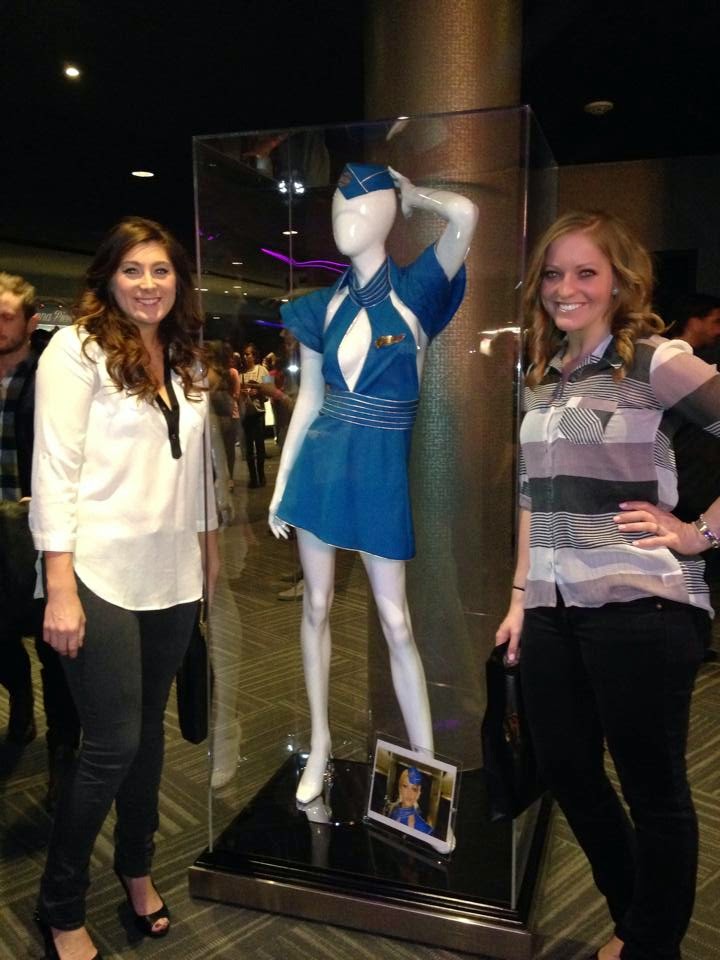 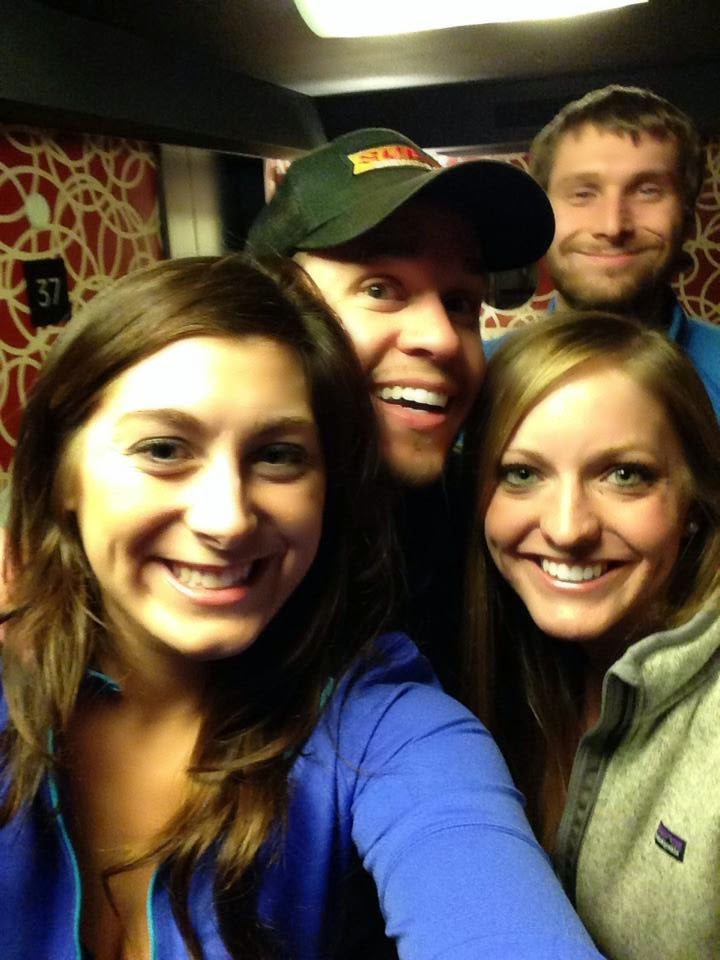 Posted by Unknown at 5:59 PM No comments:

We survived three nights below freezing and two thunderstorms. Now we have to survive the summer heat! Our garden is coming along great. I think we are going to have brussel sprouts and broccoli coming out of our ears but so far we have some fresh veggies making progress. I even have three small tomatoes starting out! 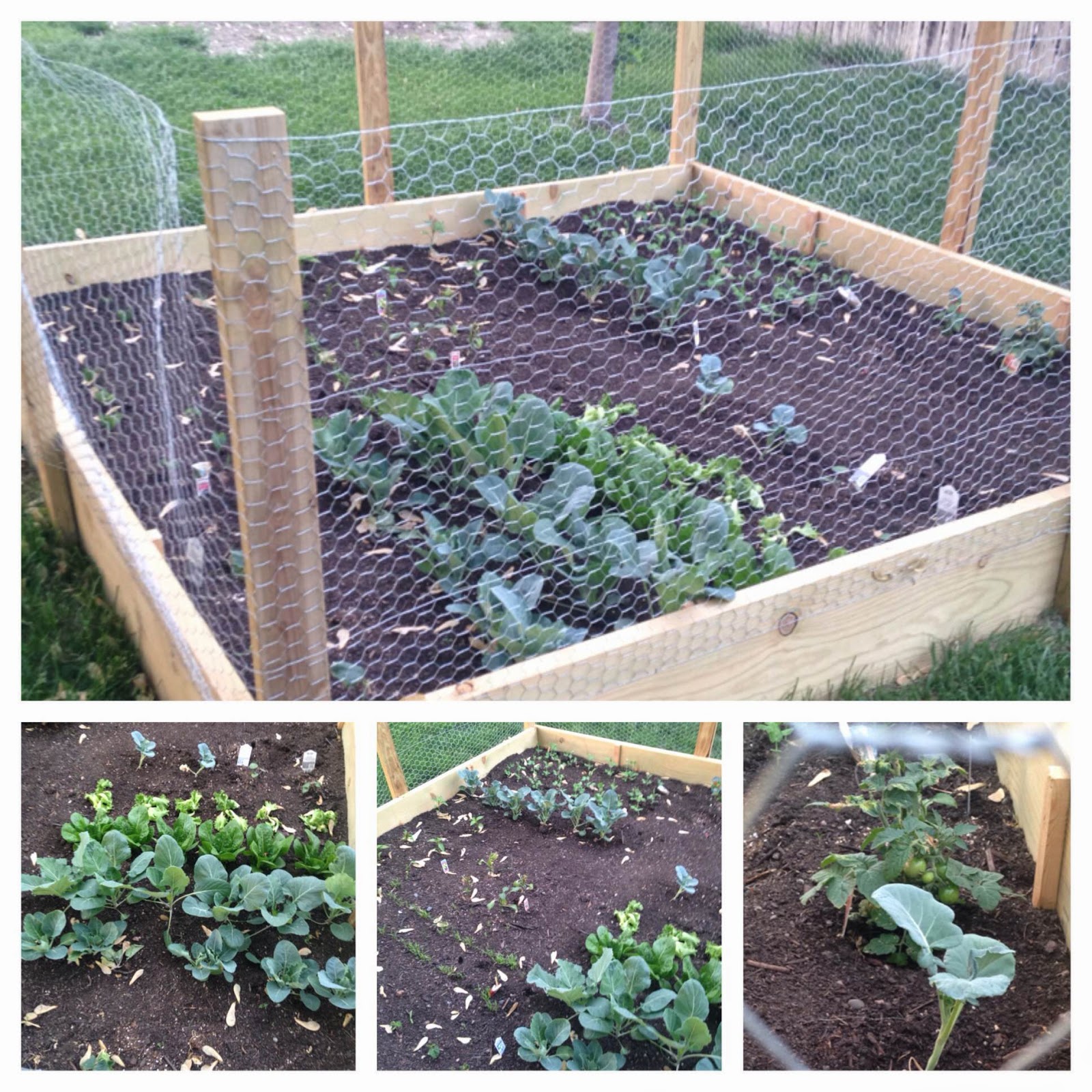 Posted by Unknown at 5:19 PM No comments:

I am obsessed with making cupcakes and am inspired by the simplicity of Sprinkles cupcakes. Sprinkles first opened their oven to our hearts in Beverly Hills. They coined the terminology of the first Cupcake Boutique Store. They have a variety of options and the options in their case changes daily. What is great about Sprinkles, is that they just have their own signature frosted look and it is modern and chic.

You can bring the Sprinkles bakery to your own home by purchasing a Sprinkles cupcake mix. They come in red velvet, dark chocolate, vanilla, lemon, banana, pumpkin, spice and chocolate peppermint and make 12 cupcakes per mix. The kit comes with instructions on how to mix and bake just like your typical store bought mix. It also includes the signature Sprinkles Modern Dot to adorn on the top of your cupcakes. 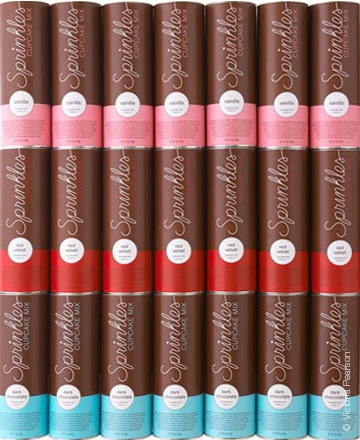 I chose to mix up the vanilla cupcake mix but I added a little flavor by adding a fresh homemade strawberry puree. That way I could take advantage of some of the local produce in town. I frosted using a vanilla butter cream frosting and covered with fondant to give it a smooth texture. They turned out really cute and delicious. My co-workers enjoyed them! But, they always enjoy my delectable creations! 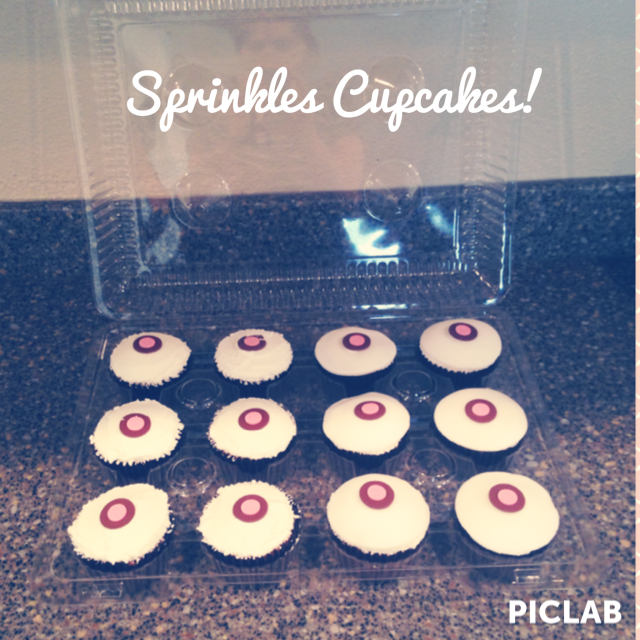 My husband built us a raised garden for us this past weekend. He knows I have no green thumb but he wanted us to have an outside project to do together. Which is cute so I couldn't complain and if I get a tan while wedding or something I won't be upset! He stapled chicken wire around the perimeter to keep the bunnies and deer out. We planted carrots, green beans, peas, lettuce, brussel sprouts, peppers, tomato and cucumbers. I'll keep you posted as it grows! 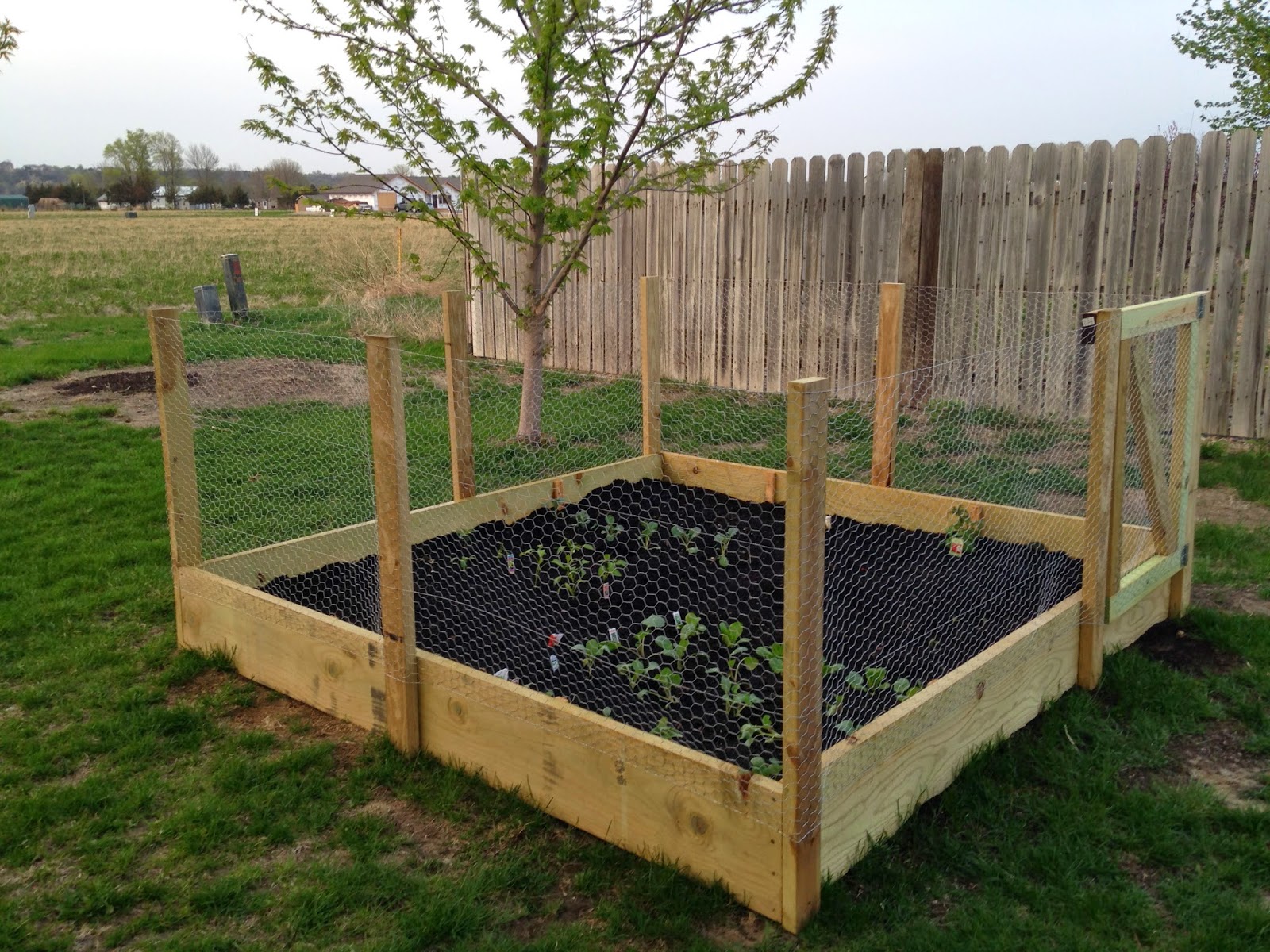 My husband and I honeymooned in the beautiful ski village of Breckenridge, Colorado. Normally I'm not an outdoors person who would go out of my way to hike or bike but I do occasionally enjoy participating in these activities. Kyle's cousin owns a cabin and offered for us to stay there during our trip. It was such an amazing time and I would recommend it to anyone for an off season visit. It was so relaxing and fun. We did a bike excursion and went zip lining. The colors were just beginning to turn and the air was crisp and clean. I saw my first snow of the season, got a sunburn and wore sweaters the whole time.
As a special treat, we stayed one night at The Broadmoor Inn in Colorado Springs. Our dinner was way too fancy but it was fun to spoil ourselves just once. We even had turn down service! what is that even!? But I loved every minute of it And it was so memorable and fun. 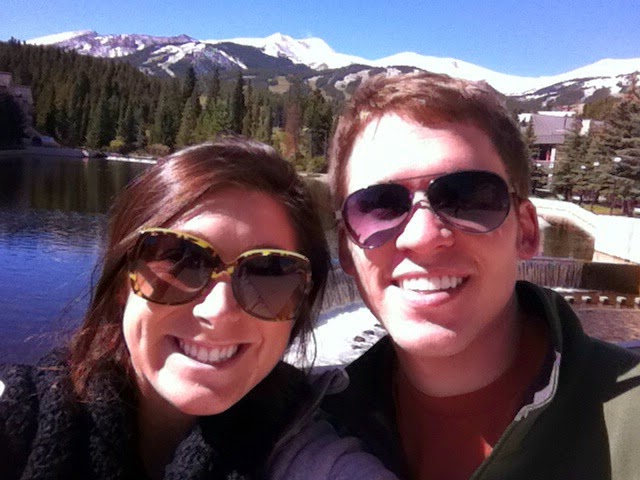 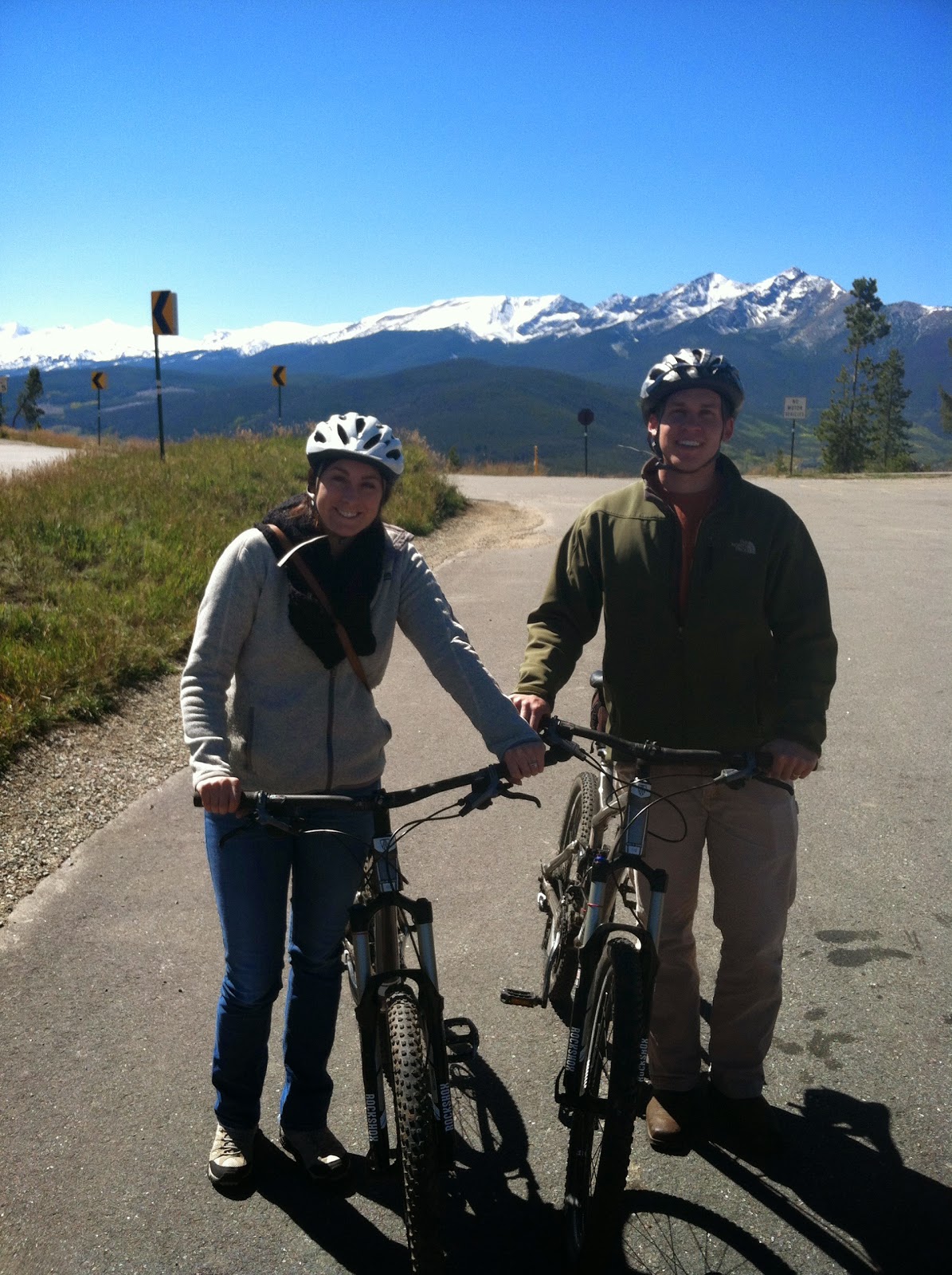 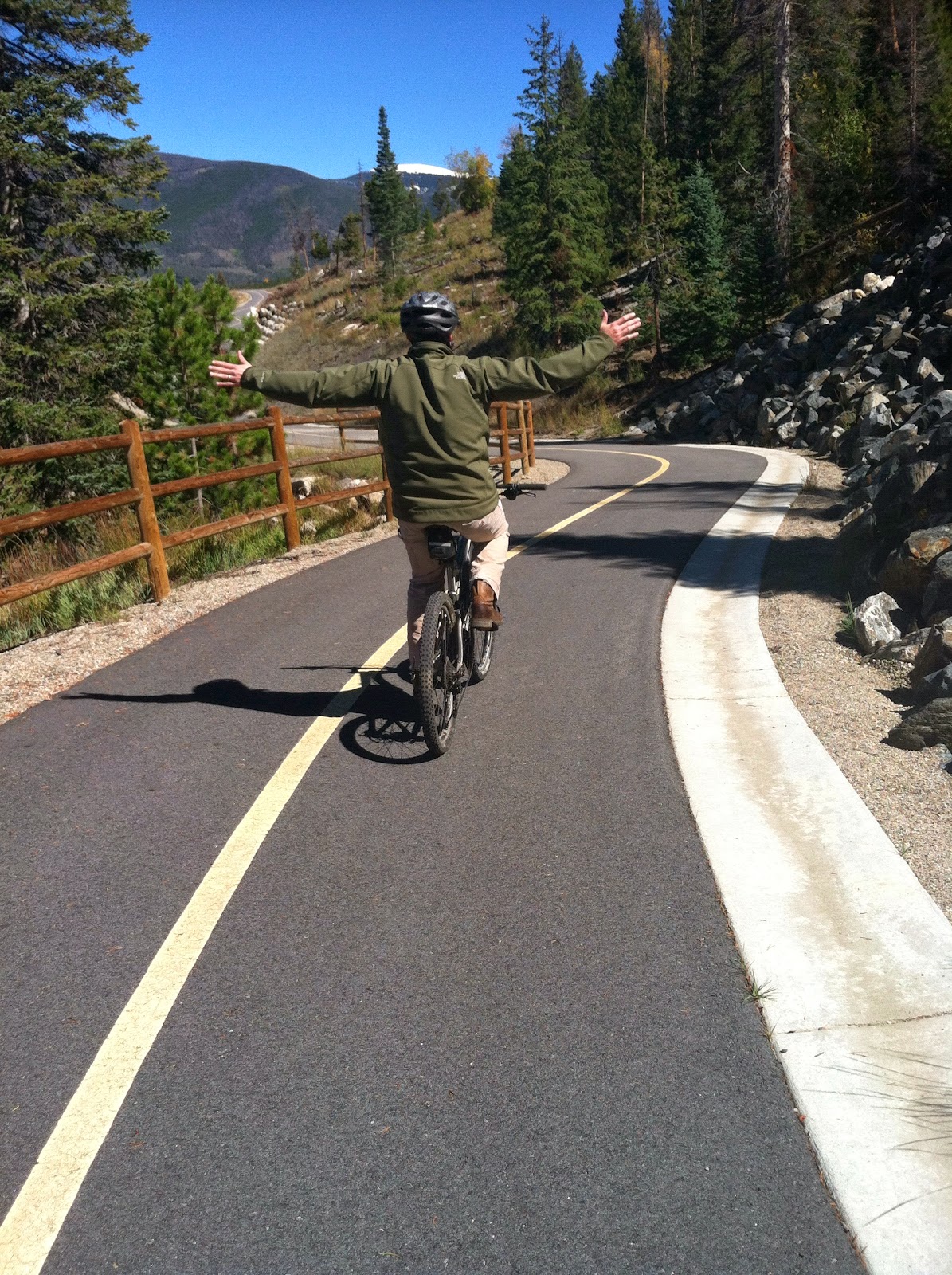 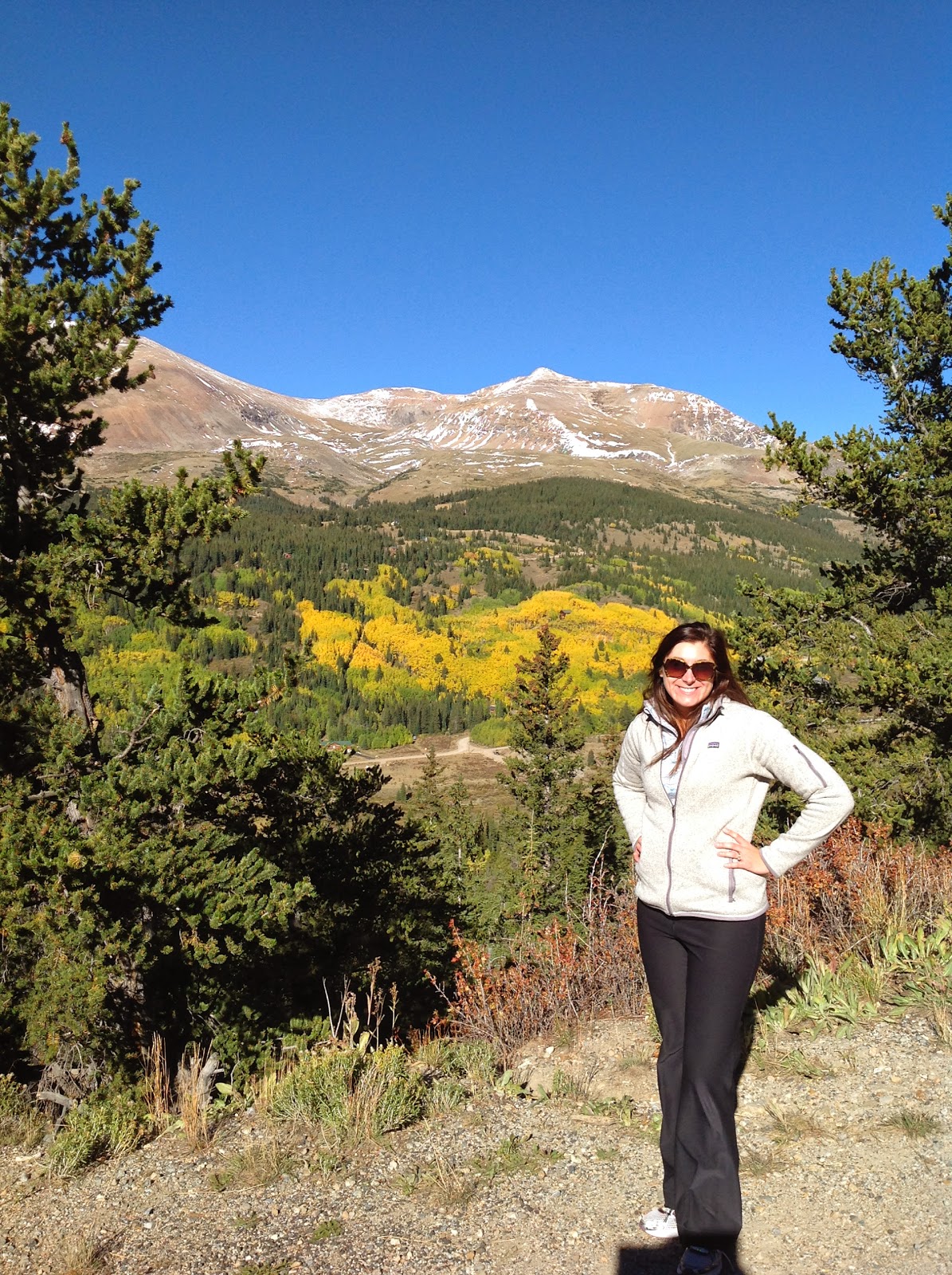 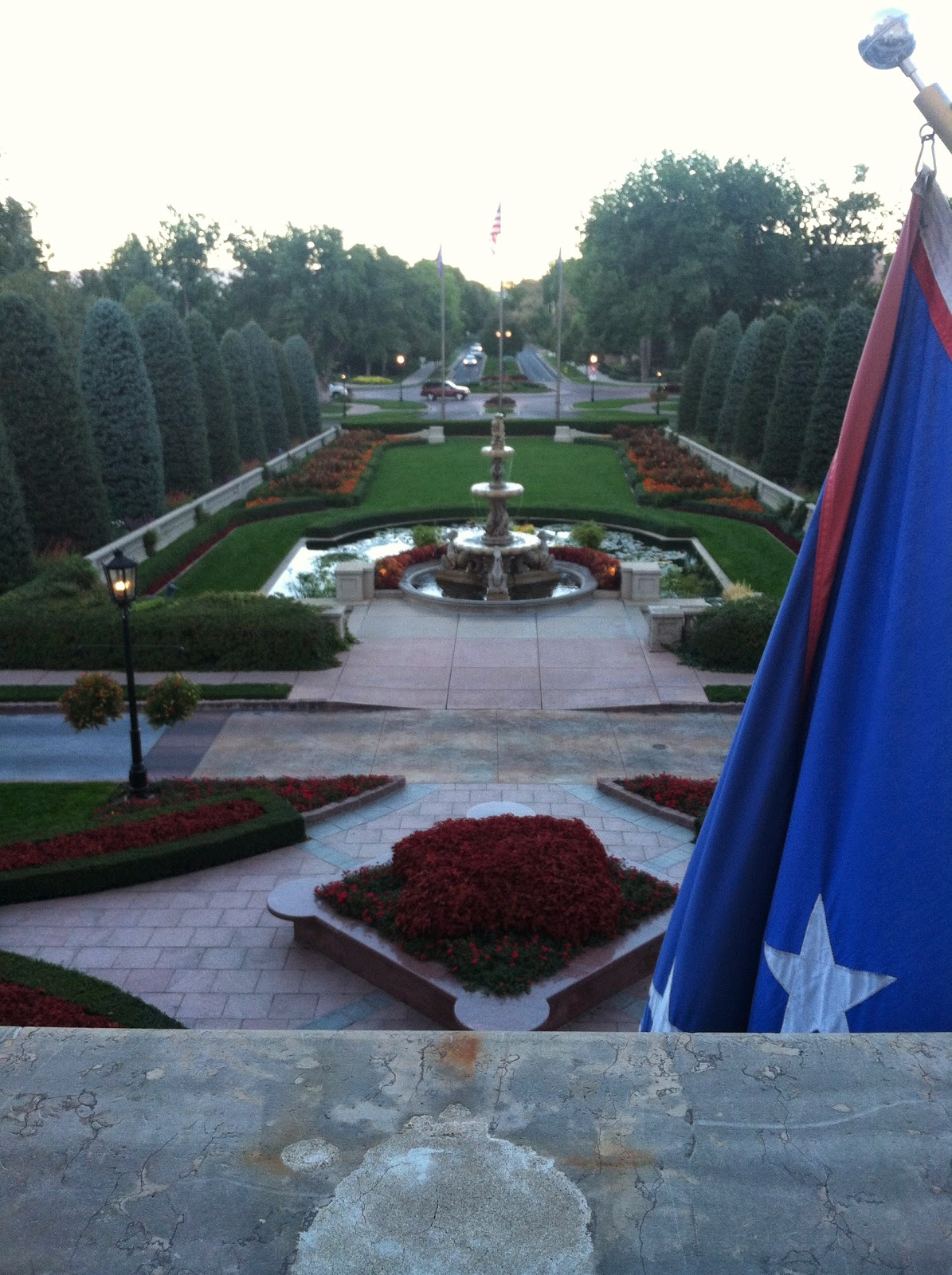 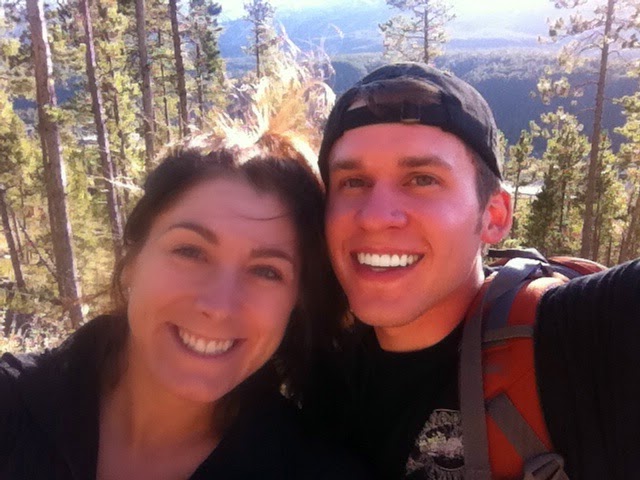 Posted by Unknown at 6:19 PM No comments:

My mom, little sister and I hosted a bridal shower for our future and favorite sister-in-law. We decided the theme would be based on the classic musical, Seven Brides for Seven Brothers. Gingham fabric, Quilt blocks, milk tins, wild flowers. If you have ever seen the movie, the Seven Brides dance around in their bloomers and sing about being a "June Bride" and since Samantha will be June Bride we thought it was a fitting theme. I made some simple star quilt blocks using coordinating gingham and flower fabric for centerpieces. We topped those with tin milk buckets and places small flower bouquets and pictures on the table. I made a rosette cake and mom and I made cream cheese wedding mints. It was a really great time and we are so blessed to have a new sister in less than50 days!

Posted by Unknown at 8:23 PM No comments:

If you haven't checked out the ToneItUp ladies it's about time to pay attention! They post daily fitness tips and goals to keep fit and have fun with life. Right now they started the Bikini Series, where the main goal is to get bikini ready for the first day of summer on June 21st. Check out some of their other posts on ToneItUp.com.

I am going to accomplish their #100bySUMMER plan! 100 miles of cardio by June 21st. It isn't just running miles. Biking, dancing, swimming and any intense cardio counts! As a general rule 10 minutes of intense cardio counts as 1 mile. Biking 1 mile=1/3mile. Other rules can be found here.

If you want to follow along with me! To meet the goal, you need to get about 1.7 miles in daily. Totally doable! And don't forget to spice it up with some toning and ab exercises. 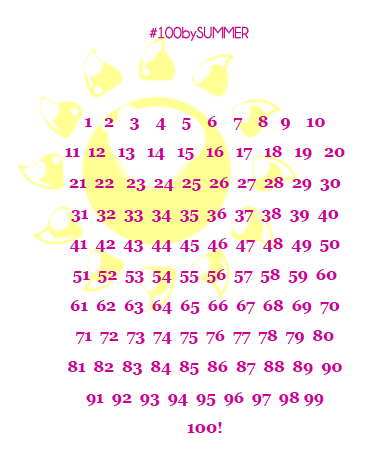 Posted by Unknown at 7:57 PM No comments:

It seems like everytime I visit my hometown of Pierre, South Dakota, I have some occasion to celebrate with cake. I mean, there is always a reason for cake. This month, I made a cute rosette ombre cake for my future sister-in-law's bridal shower. The theme was "Yellow" and "June Bride" so everything was inspired by her favorite color and movie, Seven Brides For Seven Brothers (one of my favorite movies too!).

Anyways, to make the cake I made a 2 layer white cake and a butter cream frosting. I dirty iced the 2 layers to seal in any cake crumbs. Make sure to put your dirty iced layer in the fridge for at least 10 minutes to make it easier to ice. Then to make the rosettes, I used a Wilton 2D tip and in a circular motion (almost like you are frosting a cupcake) you work from the top middle out and down. I started with the natural white on top and then the light color around the edge and then finally the darker yellow on the sides. 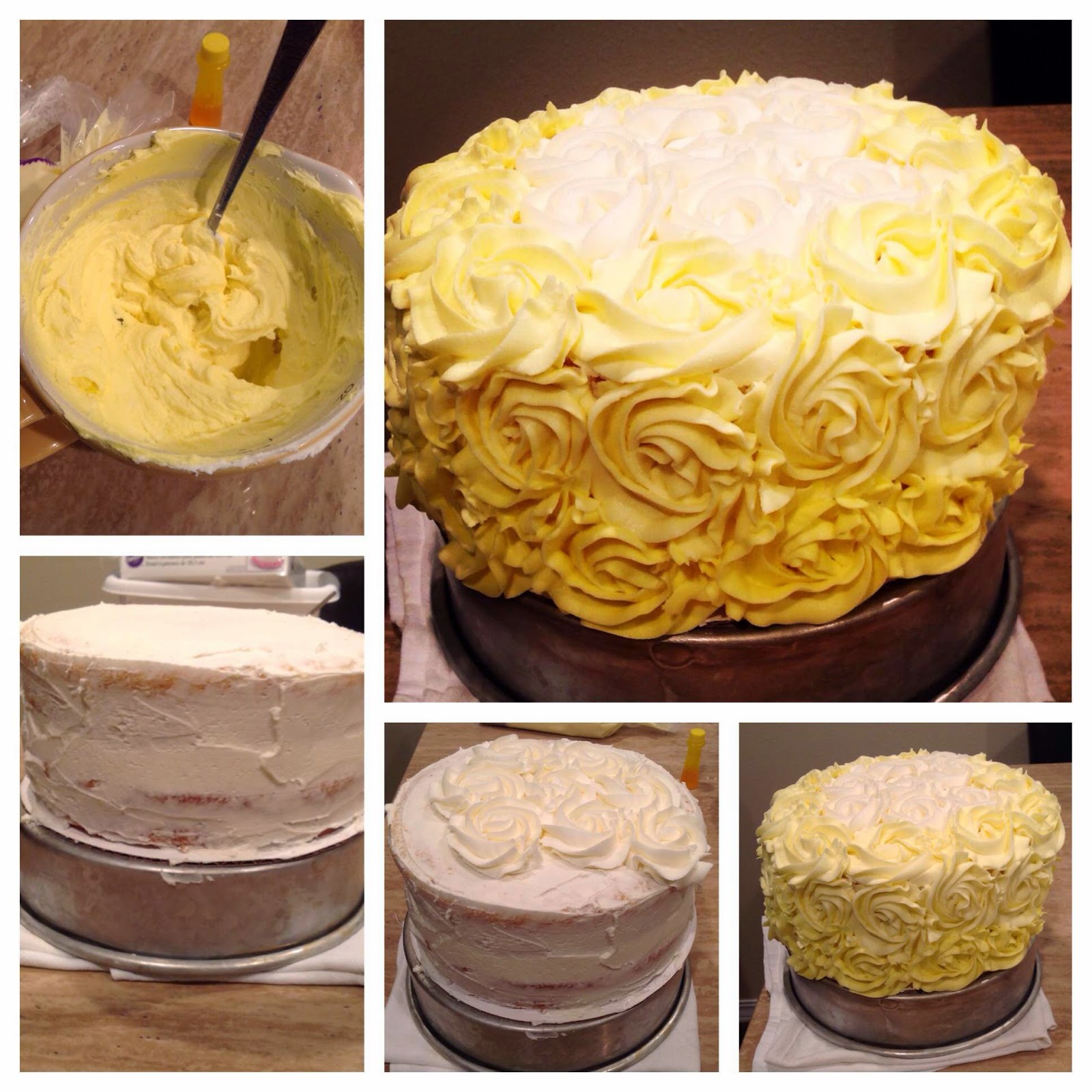 It turned out really cute and really pulled the bridal shower theme together. Plus, it was yummy!

Posted by Unknown at 7:30 PM No comments: